Jaane Doe & the Art of Reinvention

Jaane Doe & the Art of Reinvention

Born Born in the Bronx [Sidenote: The sec­ond fea­ture in our Woodyfest 2018 series spot­lights Jaane Doe. Doe had the sec­ond slot at the Brick Street Café on Thursday of the fes­ti­val.] under the name Elizabeth Gowan Berliner, Jaane Doe started her musi­cal career at age eleven in Catholic School. There she would line up her class­mates in the halls to teach them the pop­u­lar folk music of the day — “Where Have All the Flowers Gone?” “Blowin’ in the Wind,” and “Turn! Turn! Turn!” — so they could play them at the parish folk masses. 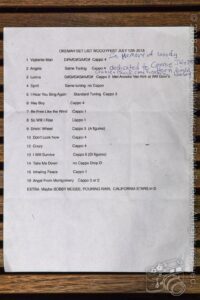 The 1970s saw her work­ing pro­fes­sion­ally as a folk musi­cian, even­tu­ally based in Los Angeles, where she played such leg­endary venues as the Whiskey-a-Go-Go and the Coach House. By 1988 she was signed to Rhino Records on their Rampage sub-label, this time as the leader of metal band Crisis. The band achieved recog­ni­tion when L.A. heavy-metal radio sta­tion KNAC held a “pure rock” [Sidenote: Based in Long Beach, KNAC was on the air from 1986 to 1995. Their slo­gan was Pure Rock.] con­test, open to local, unsigned bands. Crisis entered their song “Call of the Wild,” which earned them a spot on the Son of Pure Rock com­pi­la­tion and gar­nered them stand­ing as one the of city’s top ten metal bands.

Her career went on hia­tus when she found her­self a widow rais­ing three chil­dren. As her chil­dren reached an age of suf­fi­cient inde­pen­dence, Doe returned to per­form­ing, releas­ing her solo debut Burns Like Fire in 2007. More recently she has per­formed a series of shows with Annie Guthrie. This year marked Doe’s first Woodyfest appearance.

You can help us to keep bring­ing you great arti­cles, news, and pic­tures by mak­ing pur­chases through our affil­i­ate links to Apple Music, Adorama, B&H Photo & Video, Leica Store Miami, and Amazon.

↑ Go back to the beginning of this page.
">Mercury Photo Bureau underlying-calculable